I Signed Up for Private Lessons with Clossius 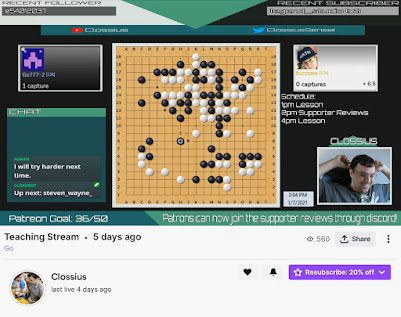 Clossius Reviews One of My Games on Twitch

Tomorrow at 2:00 PM Eastern time I am starting weekly one hour lessons with Shawn Ray, AKA Clossius. I have given him permission to live stream the lessons via Twitch because I admire the way he is trying to reach as many people as possible. If sharing my lessons can help, then I am all in.

I am no stranger to putting my private lessons on display and won’t be self conscious about others watching, so anyone who is interested can join the stream to watch.

For a number of years, near the turn of the century, I opened my two hour Saturday morning lessons with Yilun Yang to observers in the Wings Go Club room on KGS. In fact I was the first to bring Yang over to KGS. The server was new, people were very polite, but there was little teaching content available for people to view. It gave me pleasure to share my lessons with others, and Yang was fine with it.

I discontinued private lessons about six years ago and took about a four year break from studying go. That changed in 2018 when I decided to sign up for the American Yunguseng Dojang. Since then I’ve gotten more serious about studying.

If I am ready for lessons again one might wonder why I am taking lessons with an AGA 4 dan rather than renewing my relationship with Yang. Let me first say that everything I know about the game is built on a solid foundation learned from Yang starting at 19 kyu and ending at 9 kyu. Others have built on that foundation in group settings. Among them are In-Seong Hwang and Guo Juan.

I have more than 300 lessons with Yang to look back on, and I do load some of them up from time to time. The fact that I never got beyond 9 kyu with Yang is ALL on me. I didn’t work hard enough for it, and when I stopped playing go, except during my lessons with Yang and at Go Congresses, I knew that it was appropriate to take a break from lessons.  My identity was “I am a Yang student” so this was hard. Picking up lessons with Yang might be valuable to me now, but I want to give the 4 dan a chance first.

Why now? That’s easy, though a bit silly. Clossius posted a couple days ago to his Patreon group that he had one weekly lesson slot open that he was thinking of breaking down into multiple slots. I impulsively thought to myself, “Oh yeah? Not if I have anything to say about it.” And I signed up. I had decided to slowly immerse myself in all things “Clossi” by upping my game reviews and eventually trying one lesson a month, so it just made sense to jump in with both feet when Clossius threatened to make that slot disappear.

I look forward to seeing if Clossius can drag this perpetual 9 kyu to 5 kyu. That is his challenge. Let’s not talk about getting to dan level.

The one thing I am not sure about is how to download the videos on demand from Twitch so I can have a record of my lessons. If anyone knows please fill me in.

I hope that my AYD and EYD opponents will tune in to my lessons so they can see my weaknesses fully revealed allowing them to strike more strategically at my soft underbelly.

This is going to be fun.

Edit: I talked with Clossius about downloading today during his live stream. It turns out that I can’t download the VOD. However, he is willing to send me videos of the lessons I play because he does download his streams, but does not keep them forever, so I need to ask for the files in a timely fashion.