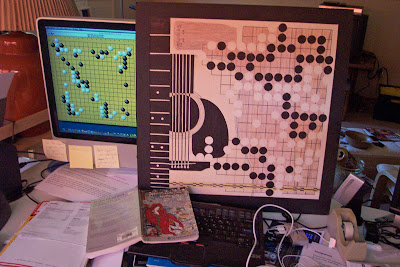 I was talking to a friend of  mine online today who is a go player and also an art student.  I was telling him about how I had to create a self portrait for one of my classes back in art school.  I combined the two most important things in my life into that portrait and left my face out of it.  No one said I actually had to include my face in the drawing so I didn't.  I was a rule breaker even back then, and not much of a drawer.  I actually I wove most of my assignments.   The drawing is pictured above propped up against my iMac which happens to be showing a go game I played at the tournament in Hoboken last Sunday.   I drew that picture in 1974.  Interestingly enough, at the time I drew that picture I was already in love with the game of go in spite of having only played a few times and being unable to find players.  I had driven through a Hurricane to play one of the games I had played up to that point.  This was the phase of my life when I traveled with a go board under my arm and forced all my relatives and friends to play the game.  None of them developed an interest, and they all accused me of making up the rules as I went along.
Posted by Terri at 2:15 PM 1 comment:

The new iPods came out on Tuesday.  Wednesday I put in my order.   I had my iPod engraved with my name and email address just incase it gets lost.  If an honest person finds it they will be able to get in "Touch" with me to return it.  Tt the very least it will be hard for a thief to sell it when it is engraved with someone's name.
So what does the iPod Touch have to do with go?  A lot.  SmartGo is currently in beta for the iPhone and iPod Touch.  Anders Kierulf announced this shortly before the U.S. Go Congress on the Go Discussions forum, and asked for beta testers there.  I saw SmartGo in action on the iPhone at the Congress, and even posted a picture of Anders with his iPhone here on my blog.
As soon as I finish the basic set up of my iPod Touch I will be installing the beta of SmartGo, and may have it up and running in time for the Hoboken Tournament on the 21st of September.  The iPod may arrive as early as today.
In addition to SmartGo, there is at least one other go related programs for the iPod Touch, such called Tesuki, which will soon be available in the iPhone App Store.  Tesuki is mentioned in another thread on Go Discussions.
Posted by Terri at 8:34 AM 1 comment:

I was doing a search for "Baduk TV" recently on the web and came across a web site for EuroGo TV
I was pleased to see that all of the videos that I have looked at so far on this site were recorded in English.  They have free videos at the site, and they also have an advanced membership option that allows you to view videos at higher resolution and  download sgf files.  Membership gives other benefits as well.
I did a search for Guo Juan on the site since I am a big fan of her Audio Go Lessons
The search yielded many videos featuring Guo Juan including a four part series covering a workshop that she conducted at the European Go Congress for double digit kyu players.
Posted by Terri at 11:39 AM 1 comment: