I Subscribed To Audio Go Lessons For One Year

Guo Juan has offered a new payment plan for her audio go lessons web site, which can be found at her Internet Go School. For 99 Euros you get a full year of unlimited access. I decided that this was an attractive plan for me because it meant that I wouldn't have to worry about access on individual offerings expiring after one month. 99 Euros is significantly more than I would have paid in the course of a year to watch individual titles if I had rented each one separately. However, now that I will be trying to get my money's worth, I will probably watch many more videos. I won't have to ask myself if I want to bother to spend the single Euro for a particular title. It's really nice not to have to worry about the videos expiring after a month.
My first order of business is to go back over the easiest Step By Step videos that I had watched in the beginning. Those are excellent videos that I might otherwise not have bothered to rent again.
Posted by Terri at 12:18 PM 3 comments:

These pictures were all taken by Don DeCourcelle.
This was an incredibly peaceful game. Not a single stone was captured during the game. The final position has one dead stone of each color near the center of the board. This is not unusual for me since I am basically a very peaceful player.
The first image is a picture of the board just before scoring. I played black in this game and the bottom territory is worth 49 points. After confirming that fact, we simply removed the lone stone on the first line and placed it elsewhere, and didn't bother to arrange that area any further. 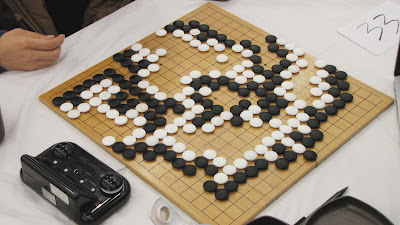 Here I am with my gray hair pondering the board. Don posted these images to Facebook, and I find it amusing that I had made an appointment to color my hair as a reward for reaching my goal weight about an hour before I saw this photograph on Facebook. Seeing it only confirmed the wisdom of my decision. 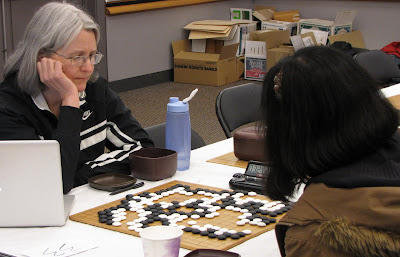 This is my worthy opponent Iris Lin, who had won all four of her games in the New Jersey Open before our game. 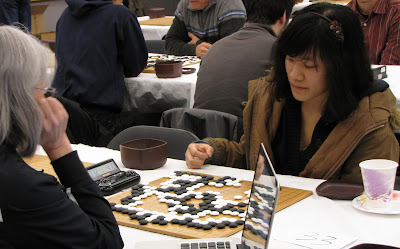 Here is a graphic representation of the board position that Don made for me. 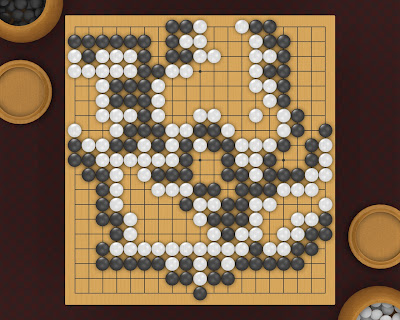 I played at the New Jersey Open again this year, and had a great time.

Many of my old friends were present. One old friend who had been conspicuously absent for years made an appearance. Don DeCourcelle, who hosted the New Jersey Yang Workshop for two years, made the NJ Open his first tournament in his return to the go scene after an absence of at least five years.

I played at the rank I "earned" at the Hoboken tournament last year, which is 9k. I was very close to 8k and would like to have played at that level, but I know that the AGA has a policy against one stone self promotions, so I didn't try to push it at registration.

I came to find that, as last year, they were lax in enforcing the policy against one stone self promotions. I found this annoying. I guess it doesn't pay to know and follow the rules.

I took my Macbook with me to the tournament and used it to record my games, which drew some attention from the younger set. During the fist game I carelessly misplaced a stone, and recorded only up to the point where it mattered. With the remaining four games I was much more careful and recorded up to the last move of these games. I actually think that recording hurt my games rather than helped them, but at least I have the game records for analysis.

I played white against a Chinese Opening. I won that game by 13.5, and did not find myself feeling under pressure during the game at all.

I played white again. This time it was a very close game which I lost by 0.5. I was able to pinpoint a totally unnecessary move on my part which cost me the game. I was so ashamed by the offending move that I was tempted not to show it to Mr. Yang because I knew what he would say about it. I showed it anyway, and he said exactly what I expected, "This is a 25 kyu move." I definitely didn't deserve to win that game. I did take comfort though in knowing that I was playing at the right level by coming in so close in spite of such a terrible mistake.

This game was with a young girl who I had played at the Oza two years before. She had won all her games when she played me, and I think she may have gone on to win the rest of them. I lost this game by 14.5. I was surprised, however, when Mr. Yang reviewed it I was told that I should have won the game. I made some bad errors that prevented me from doing so, but apparently I started out well. This game was the third game of the day, and I don't really like to play more than one serious game per day, so by the time this game was under way I was exhausted. I actually stood for this game to remain focused. It probably worked against me though by making me even more tired.

I was refreshed the next morning, and this game I had high hopes of winning. Early in the game I captured quite a large group. Unfortunately my opponent fought back valiantly, cutting off a couple key stones which added significantly to his territory. I lost that game by 3.5.

This game was against a young woman who had won all four of her previous games. At the end of the game she told me that I had offered her the biggest challenge of the tournament. During the game she actually said at one point that she would really like to get sente. I know the feeling well. I won that game by 18.5.

I'm not disappointed with my results since two of my losses were so close.

Go Takes A Back Seat To Fitness 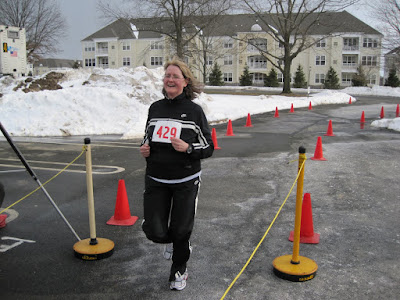 I noticed recently that I hadn't posted on this blog since September of last year, and I'm going to tell you why. I've still been playing go, and taking lessons. However go has taken a back seat to my efforts to trim back down and to improve my general level of fitness.
Retirement has been a blessing. It's been good for my go, but it wasn't good for my figure. So for the past year I have been working to take off the 30 pounds that slowly crept on at the rate of a little more than a pound a month once I was no longer on my feet eight hours a day battling teenagers. I used to be a high school art teacher.
I've been putting a lot of my energy into my other blog which I maintain on Spark People. I post to it at least once a day. Starting in October I began training to run a 5K race, and I ran my first race on Sunday, February 28th.
I have replaced the picture from when I was a high school art teacher with a photo of myself crossing my first finish line below my goal weight.
You can read about my 5K on my Spark Blog.
I attended the New Jersey Open this year and will post about that experience soon.
Posted by Terri at 12:19 PM 1 comment: