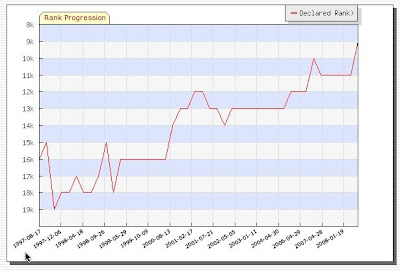 Above you can see my entry ranks for all tournaments beginning with the 1997 Go Congress. You can also see the five year stretch where I was stuck pretty much stuck at 13 kyu.
I like that you can look up your opponents and see how many games they have in the database.
I was even told on a thread on Go Discussions that if I would email them sgf files of my tournament games that they would upload them to the database. It would be really neat if the people who record their games would do this. If they did you could look at the other games your opponent had played. I would find that interesting.
Posted by Terri at 6:56 AM No comments:

SDK Again - Ratings Are In

The ratings are in from the U.S. Go Congress.

I self promoted two stones from 10k to 8k, and I managed to hold onto it by the skin of my teeth.
Posted by Terri at 2:20 PM 1 comment:

At the Go Congress this year I decided to purchase a set of Tsumego books translated from Korean into English by a company called Baduktopia. They had a table outside the main playing area and they were selling a series of books on Life and Death. I am told by my strong playing friends that the last book in the series is difficult, and definitely dan level. They also have a series of books called "Level Up". I purchased the first set of books in the series. The answers are not in the books, but they are available for the first and second series of the Level Up books online in PDF format.
Currently the answers are not yet available online for the Life and Death books, but they are working on getting those PDF files created and uploaded.
The reason this post is called "Aerobic Tsumego" is because I have taken to solving life and death problems while walking on the treadmill. I walked for an hour and a half yesterday all the while working on life and death and working through the Level Up books.
Posted by Terri at 8:56 AM 1 comment:

I decided to self promote again this year at the Go Congress. If I had been 9k at the end of the Maryland Open I would not have promoted to 7k because that would have been two far. I would have lost every game at that level. My recent dip to 10k actually offered me an opportunity to self promote the necessary two stones to 8k, and actually get a one stone promotion because I am essentially still 9k in spite of one bad tournament day. I also decided that if I played as 10k and did well that my opponents would have a right to consider me a sandbagger, and if I won a prize as a 10k it would have been a hollow victory.
I started the congress with a victory in an even game against a 5k in a casual game just before the first round of the U.S. Open. Unfortunately, he went 0-6 in the open so I don't put much stock in having won that game.
I went 2-3 at the Congress, which may just be enough to squeak into 8k territory. It is certainly enough to earn back my 9k status. It will all depend on how my opponents fare, and whether they self promoted or not. The two I won against did not self promote, so that is good news. I don't know about the other opponents.
I had a great time at the Congress. I decided not to play pair go this year although I had my pick of partners. I find it tiring to play that late at night, and I wanted to be fresh for my Friday game, which I lost by the way.
I have a lesson this Thursday and I am conflicted as to whether to show these games to Mr. Yang or not. The mistakes appear to be obvious. Strong players have pointed them out to me, and some of them were so painfully obvious that I saw them immediately in my games, which made it all the harder to play on in some cases. One might argue that it is a waste of money to show such games to Mr. Yang, but since I already know that my poor tournament results have more to do with stamina issues and mental blocks than they do with how much I know about go I like for him to see my lapses and stupid mistakes. Well, I don't LIKE it, but I think it is beneficial. The main reason I started to record my tournament games and to show them to Yang was so that the knowledge that they would be revealed to Yang would somehow make me more careful and think more of what Yang would say about the move I was considering. I hoped that would make me play better.
I have a day to decide.
Posted by Terri at 4:49 PM No comments: