I have been retired for over a year now. It is hard to believe how quickly time passes in retirement. The old saying, "time flies when you are having fun" is true for me.

I started this blog about a week after I retired, and the year anniversary of the beginning of this blog passed without my even being aware of it. Today I checked the date on the first post, and I realized the anniversary had come and gone about three weeks ago. In the first year I posted 54 times, just slightly over once a week on average.

During my first game of the day I played a young lady who had also gone 3-0 the day before. I tried to make the center of the board less valuable by extending into it, and was doing a pretty good job of it. It got to the point where it looked as if I was going to be able to kill a large number of stones in the middle, which would been even better than just making the middle less valuable. I was told by a dan player that I should have ignored the threat to my group in the upper left to make a clean enclosure of the stones in the center, but I didn't do that. I was afraid to make the game hinge on the kill. I did manage to separate the center stones, but unfortunately some of my surrounding stones got disconnected and it was going to be necessary to make seki. Sadly I had a moment of blindness when I should have thrown a second stone into an eye to prevent my opponent from capturing the single stone to make two eyes. Instead I chose to fill an outside liberty. It was stupid and it should have been obvious. If I had been watching someone else's game it would have been. I should have walked away from the game to gain composure when I realized I needed to make seki. The move was something I ordinarily would have seen, but in the excitement of the game I made a big mistake. I am not sure that seki would even have been good enough after part of my group in the upper left had been killed. I'll look into that later. I'm not ready to know that now. The board position at the time of my fatal mistake is shown below. I played A, but I needed to play B instead. I am white. One really good thing about this game was the way I handled the lower left corner. My opponent tried very hard to kill it, but I kept it alive. 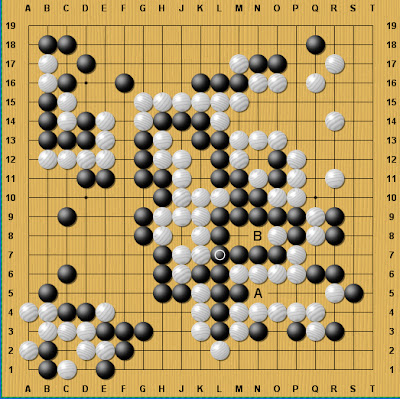 In my second game of the day I managed to get a resignation from my opponent after I made a decisive kill. After it was pointed out to me in analysis that my opponent could have made a ko for life by playing at o1, I didn't feel quite so smug about the kill. But if one's opponent doesn't see the ko, then the ko doesn't exist. I was euphoric from the kill and wanted to avoid the mistake of failing to take a break at the appropriate time. I went for a break to clear my head so I would not do something stupid in the aftermath of the kill. That has happened to me more than once. The second game of the day is shown below at the point of resignation. When I returned from my break my opponent resigned. I was really tired by then, and it was a relief not to have to play the end game. I am black. 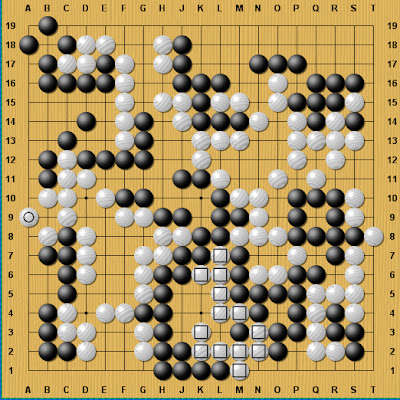 My final result for the tournament was 4-1. That earned me a nice certificate suitable for framing, and a cash prize of $40.00, which paid for my playing fee and then some. As much as it would have been nice to go 5-0 I am glad things worked out the way they did. If I had not lost the 4th game I would not have had the valuable lesson about seki, which I am unlikely to forget. I also would not have been matched against my 5th opponent so I would have missed our game, which I found to be very interesting.
I do not expect my record to be sufficient to bring me up to 10k from 11k.
It is my plan to have Mr. Yang review the NJ Open games during our next lessons.
Posted by Terri at 2:09 AM 1 comment:

Yesterday was the first day of the New Jersey Open. Some die hard go players traveled from the Baltimore and D.C. area, but snow kept many players away this year. I think there were only 33 tables, and there were very few players weaker than myself.

I won all three of my games yesterday and I am going back hoping to win one or two more. But even if I lose both games today I will have won more than I lost, so I am in a good position.

I will do my best to keep a calm mind. I know my go skills are up to the challenge if I can just keep my mind calm.
Posted by Terri at 8:32 AM No comments:

After a few weeks of having that nasty question mark attached to my rank on KGS I decided to play some rated games to get rid of it. Yesterday I used automatch to find my games. The first game was a 0.5 komi game against a solid 8k, which I lost by 20.5, a significant defeat, especially since there was no real fighting. That loss dropped me from 7k? to 9k?. Well, that just couldn't be allowed to stand. So I fired up another automatch game right away. I ended up as white against a solid 11k giving two stones of handicap, which I knew would be a challenge. I play white often, but I am still much more comfortable as black even when there is no handicap.

I actually was ahead by 4.5 according to Score Estimator just before I played the winning move. In the screen capture below you can see the shadow of the stone that I intend to play at h19. Because black made his second eye at j19, I was able to cut at h18. I would then be able to capture the black stones to the right because black could not approach from the inside because of a shortage of libeties, but I could approach from the outside. 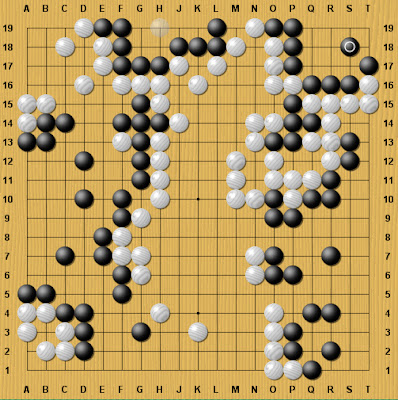 The screen capture below shows the position at the point at which black resigned. Score Estimator shows W+37.5 at this point. I was glad not to have to depend upon superior end game play to win the game because I am okay in the end game these days, but I hardly have superior end game skills. I would not have been happy falling to 10k, so it was a good thing to get it over with painlessly... well, at least for me. :-) 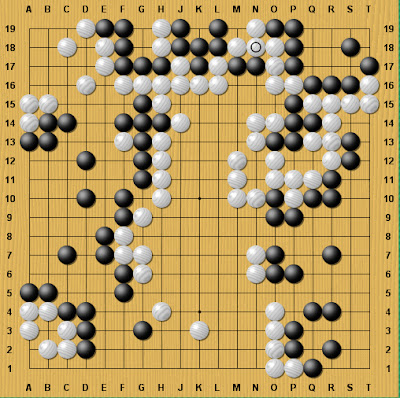 I spent last weekend in Evanston, Illinois at a two day Yang Workshop. This is the fourth year I have attended this particular workshop, and it was a great event as usual, even though it was a day shorter than usual this year.

After the Oza I decided to have Mr. Yang review all six of my Oza games using about thirty minutes of my regular lesson time for each game. Although I had reviewed games with Mr. Yang online during my lesson time previously, that was many years ago, and I had never reviewed my tournament games. I had only reviewed games I had played online. So this was the first time that Mr. Yang had seen any of my tournament games.

I enjoyed reviewing the games, and definitely got value from it. But one of the main reasons I wanted to do it was because I wanted Mr. Yang to get a feel for what a typical tournament is like for me. It was my hope that seeing the situations in which I end up with other players might impact in some way the situations that Mr. Yang might choose to create in our lessons games. I believe that everything he sees about the way I play has potential to influence what he does in our lessons, if not consciously, then subconsciously, based on what he knows about how I play, and what I need to practice.

Mr. Yang said something at the workshop which confirmed my belief that he had"filed away" some information from those Oza game reviews, and added it to his knowledge of "how Terri plays". There was a point in a game review or a lecture at which it was appropriate to play a 2nd line move against a 3rd line move which would then allow for a double sente move on the side. He said, "Terri makes this kind of move often." That would not be so impressive a statement if I actually got the chance to play such moves in our lesson games. But given the fact that our lesson games don't often get beyond the middle game, he had to have made that statement based on what he had recently observed in my Oza games, which we reviewed to the end. I am only one of many students that Mr. Yang had taught in the past month, which makes his observation even more impressive to me.

At the workshop I made it a point to show Mr. Yang one of the video recordings I had made of our lessons. He said he had never seen anyone make that kind of recording before. It was just like watching a KGS lecture only it was our lesson.

We did experience some significant lag in our last lesson, however, which makes the video recordings less valuable since stones and text sometimes appear very quickly in spurts when lag occurs. In those cases it is necessary to look at the sgf file to make sense of things. I told Mr. Yang that it is more efficient to view the sgf file from a time standpoint, but it is nice to be able to watch the lesson in real time as well.
Posted by Terri at 9:19 AM 2 comments: