I have a go buddy named Charles who plays a great deal. He will review a game with me if I am online when he has finished, especially if I tell him I want to look at something in the game. We will go over the game record together sometimes, but mostly he tends to move on to the next game rather quickly.

Charles and I are like Jack Sprat and his wife. We are opposites.

While Charles plays a lot, I don't play much at all I'm afraid, except for my biweekly lesson games with Yilun Yang, 7p. That's not the way to get stronger.

I want to be more like Charles. His name on KGS is "chaslayton". Look at his playing record. 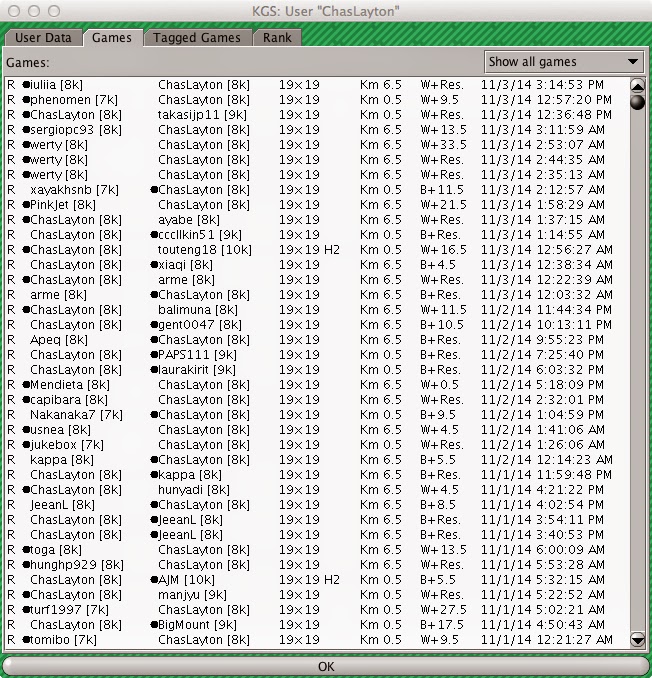 When I told Charles today that I wanted to play like him he said, "Oh you mean too fast and when you are tired?" I laughed and said, "No. I mean without fear."

So as of today I am officially adding to my study routine the following: I will play seven rated games each week. I will play without fear just like Charles, only maybe a little more slowly. This will average to one game per day, but I am going to probably play those games in one or two sittings. They will be rated games. That is the whole idea of playing without fear. Of course, we can fear playing free games too. We can fear looking foolish, rated or not.

When I logged on to KGS today I found a message from Charles. It appears below.

I think the time is now. I've got between now and next Tuesday morning to play my seven rated games.

You can do it! I'll be rooting for ya!

Guo Juan always tells me to play more. :) I'm actually playing more than I used to. Study has really improved my enjoyment of playing recently, which is nice. Also, I like playing with friends / acquaintances when possible. It becomes more social and less of a test.

I don't think a ton of games are needed, but I personally find about 2 quality games is necessary for myself not to get rusty.

I personally find that if I can get quality games in two days per week with 2-3 games on each of those days that is enough play to allow for a mild amount of improvement. Of course one of those days has to be my going to the Korean club to get some stretching games.