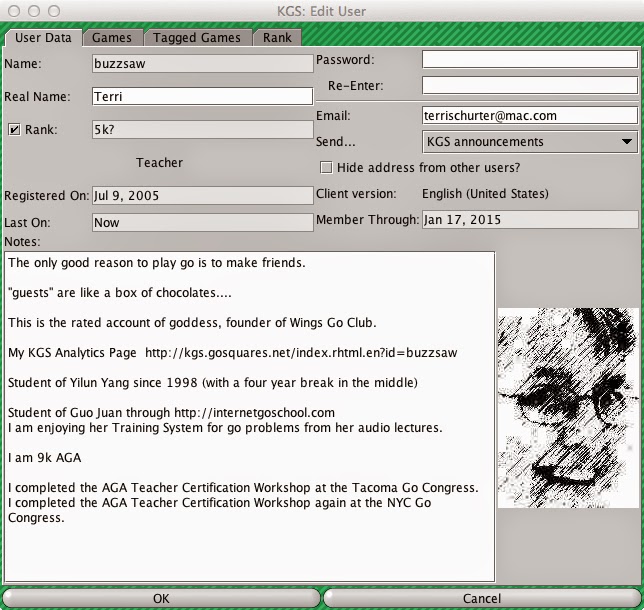 I wanted to preserve the memory of my brief time as a 5k on KGS, even if it was as a 5k with a question mark attached.

I ran into my good go buddy, Charles, on the server this morning. We spent a little time looking at the last few moves of the final game I played yesterday. It was a shameful game during which I allowed my opponent to gain a 50 point lead. The game was over and there was really nothing to do. But I saw a weakness, and I made a few plays to try to exploit it. I was successful.

He resigned, but Score Estimate shows me ahead by over 20 points when he resigned. That means that my desperate plays created a 70 point swing in the game. He had a huge moyo, which I destroyed.

If you are interested in seeing the game you can find it easily on my KGS Analytics page for the games I played yesterday. Just click on the third game. It is the one with popo.

I played horribly in this game, and I know it. It is not a game to be proud of. I just managed to pull something off at the end. That always feels fine.

Charles asked me if I was getting over my playing phobia. I told him that I was feeling a lot better about it. Charles shared his secret with me. He said that the real secret is not to care. I think he is right.

Just to make it easy to see what happened at the end of this game, here is a screen shot of the board before I started to make trouble. Look at that huge black moyo. 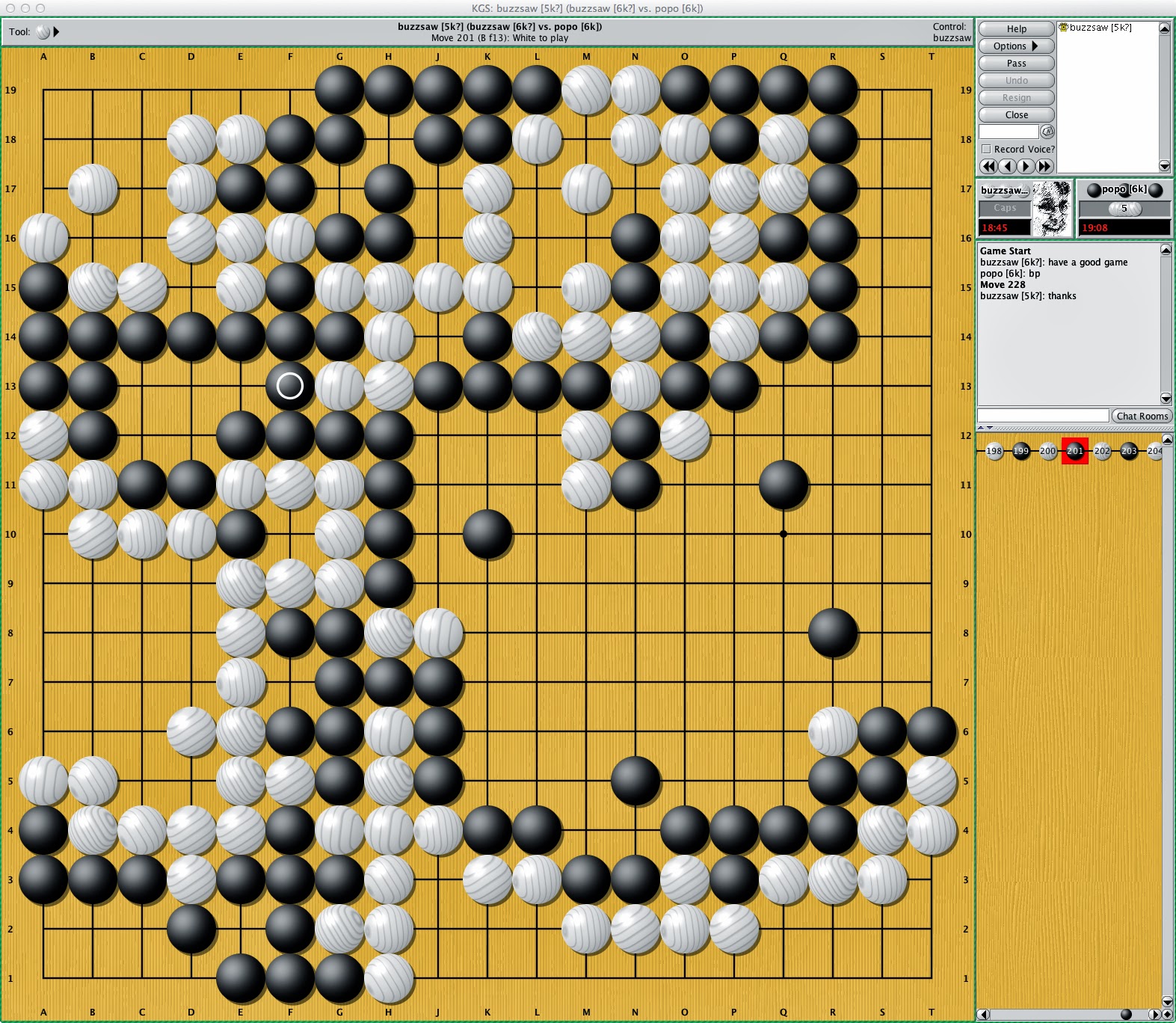 And here is a screen capture of how the board looked at the time of resignation. 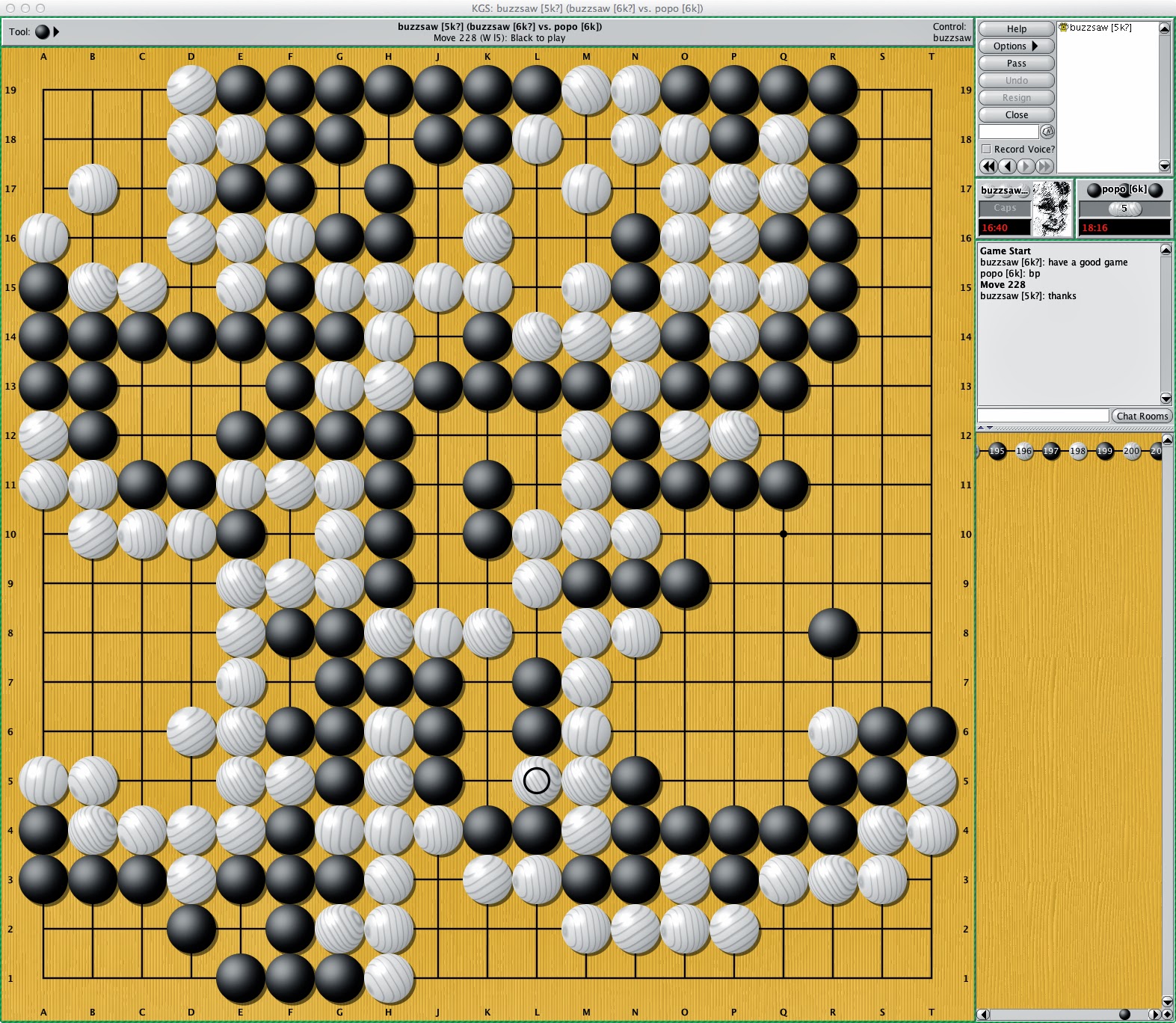 While I certainly don't try to relish on games like this either, I wouldn't diminish the fact that you were able to exploit his mistake at the very last second. Being able to hold on to a win is just as important as maintaining your lead, so I'd still be proud of turning the game around at the last second.

PS. I don't think this is the last time you'll see the 5k ranking. With all the training you do, one day you will even surpass it!