I Think I've Got a Student 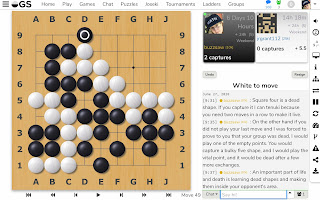 Though I have been playing go for over fifty years I can't say that I have ever really had a student. I think I might have one now.
I gained this student because of COVID 19. He is a player in the DC area who is relatively new to the game, enjoys face to face play, and was trying to figure out how to join in with the online meetings of the National Go Center using KGS and Discord. The Discord element appeared to be the weak link.
After some discussion via email I convinced him that his best option might be playing on OGS, and I got him started with a 9x9 correspondence game. He was curious why I wanted him to play 9x9. I explained that I wanted him initially to play a short game to get used to the server. I also told him that there is value in 9x9 play. While we played our first couple of games I observed him playing with two other players near his own strength in 19x19 games.
Fast forward a few weeks and we are still playing 9x9. We are on our 9th game, and he keeps coming back for more. He calls me Go Master, which I find both flattering and amusing.
He has the fighting spirit I used to have when I first started to play. My games against him include a lot of unnecessary carnage because I know he can handle it and eagerly come back for more. He has gained a real appreciation for 9x9. He has learned that there is nowhere to run, and that he must stand and fight.
It had been my intention all along to review games over the phone, but that has not happened yet. I thought I would try to do a little teaching within the game itself on this one. Read the text in the image above to see. I think that after this game is over we should play that kill in the lower left out even if he takes my word for it.
I've also thought that it might make some sense to review some of his 19x19 games with players his own strength.
He is still trying. 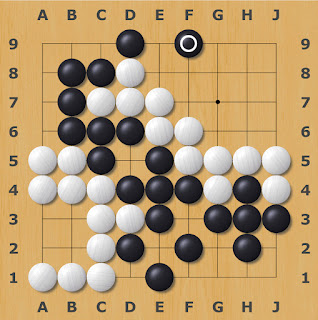