Tracking the Time I Spend on Go Study

About a month ago I started using a program called Now Then Time Tracking Pro. It is an IOS app designed to track the amount of time one spends on various tasks. I thought this might have some value in focusing my attention on how I use my time for go studies.

This chart represents my first month of activities. 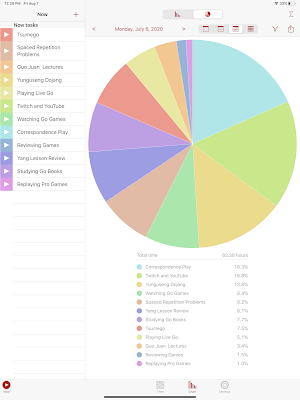 Last month I spent 62.38 hours on go activities, which is roughly two hours per day on average. That is a modest amount of time to spend studying go. I should be spending more time than that.

I have created twelve different categories to track my study time. 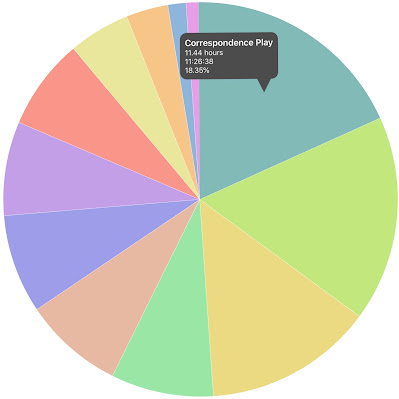 Correspondence Play accounted for 11.44 hours, or 18.35%, of my time. I play correspondence on OGS and the majority of that time is spent pondering variations. I spend way too much time doing so, and should probably play more live go than correspondence go. 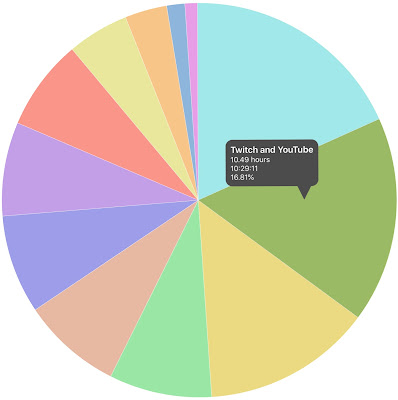 Twitch and YouTube accounted for 10.49 hours, or 16.81%, of my time. I watch Clossius on Twitch, and also a few go related videos on YouTube. I also recently watched live commentary on the AGA channel on Twitch during the e-Go Congress. This is probably the category that is the least personally engaging. The games are not my own, so my attention wavers and the experience probably offers the least value for the time spent. It is more along the lines of entertainment than study. 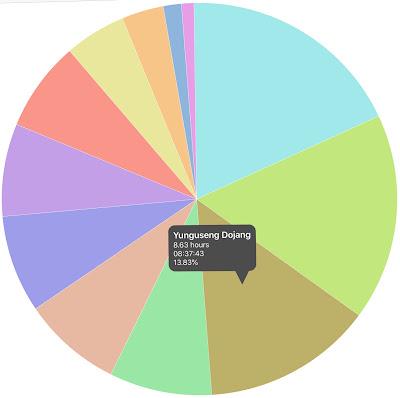 Yunguseng Dojang activities accounted for 8.63 hours, or 13.83% of my time. These activities include live play. It was difficult to decide whether to separate out the time spent playing go, but I decided to include it because then the results for playing Live Go show the amount of time I spent playing games that I was not being forced to play as part of the Dojang. That is an important distinction. In addition to live play Yunguseng Dojang time includes game reviews and lectures which I can watch as they happen, but I can also review them later. These game reviews are engaging because they are for games of people I know I will be playing again. They are people who have become friends. I concentrate on the reviews of players in my own league, which is the C league, the lowest one in the Dojang. 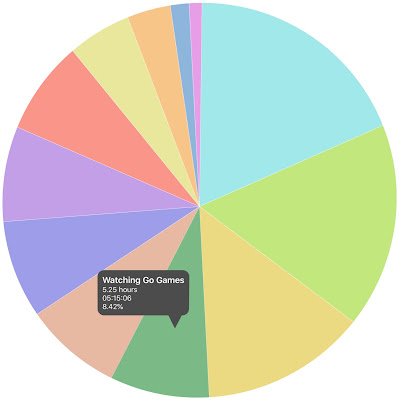 Watching Go Games accounted for 5.25 hours, or 8.42% of my time. These are mostly games of my friends in the Yunguseng  Dojang, though some are games of friends I met through the AGA at either Go Congresses, Tournaments, Workshops, or local go clubs. I am not sure if this should even be counted as go study as it is much more like entertainment than study, but I believe it has some value. 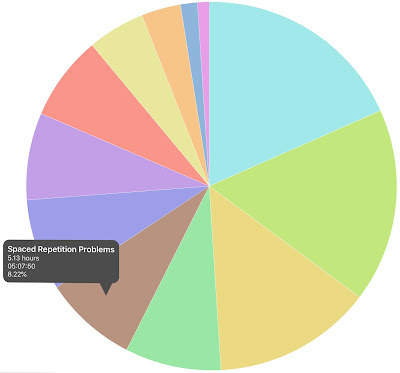 Spaced Repetition Problems accounted for 5.13 hours, or 8.22% of my time. These problems are derived from lectures taught by Guo Juan as part of her Internet Go School. I’ve been a member of the school since near its inception, with a few breaks because I was taking sabbaticals from go study. I usually do 30 problems a day which takes me about ten minutes. I am thinking of doubling my problems per day because I have a backlog of over 500 problems which I would like to catch up on. 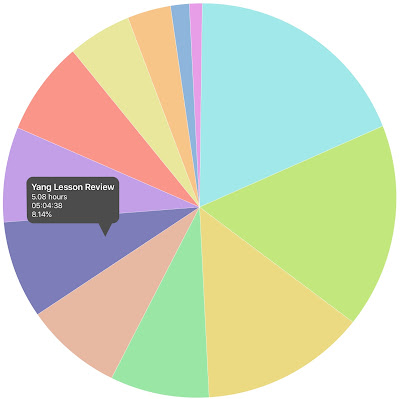 Yang Lesson Review accounts fro 5.08 hours, or 8.14% of my time. I studied with Yilun Yang off and on from 1998 until 2015 with a four year break in the middle during my last four years of teaching. I felt as if I was not getting the most from my lessons at that time because my job took up way too much of my time. In 2015 I decided to take a break from go and stopped playing altogether except at Go Congresses, which I continued to attend. I have recently started to go back and review my previous lessons with Yang using Smart Go Kifu. I am currently working on lessons from 2010. 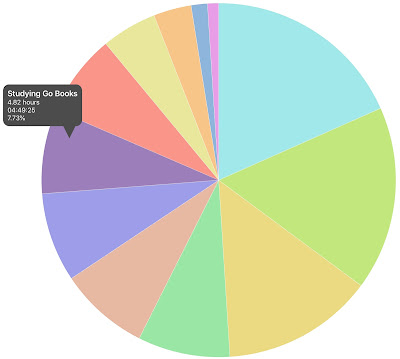 Studying Go Books accounts for 4.82 hours, or 7.73% of my time. In spite of the fact that I have an extensive library of go books, my current go book study consists of reading books in GoBooks, the app from SmartGo created by Anders Kierulf. I recently downloaded the entire Learn to Play Go series by Janice Kim, and am working my way through it again. I have the books, but I much prefer to read go books digitally because I always felt the need to study go books with a board and stones which slows things down considerably. 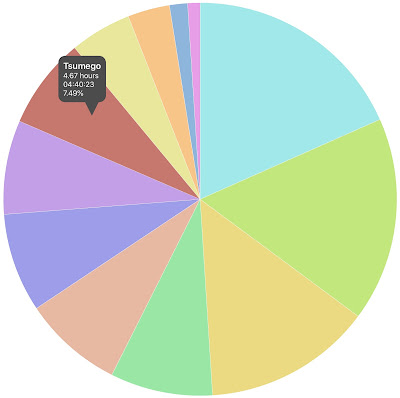 Tsumego accounts for 4.67 hours, or 7.49% of my time. Up until recently my tsumgo study has consisted of doing problems on GoProblems.com. I just downloaded the BadukPop app at the suggestion of another student of the American Yunguseng Dojang. I also study the Graded Go Problems books, but I count that as reading go books. 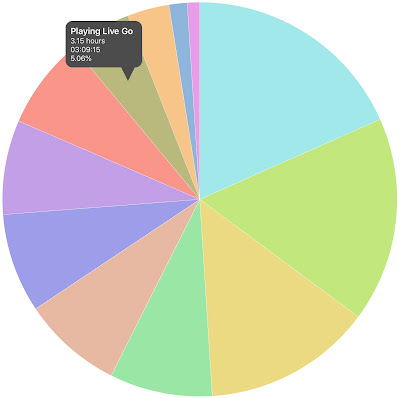 Playing Live Go accounts for 3.15 hours, or 5.06% of my time. This is the category that most needs to be increased. Next month will show an increase due to the e-Go Congress and the Yunguseng Summer Stage. It will also increase because I am beginning to play more games with friends from the Yunguseng Dojang. 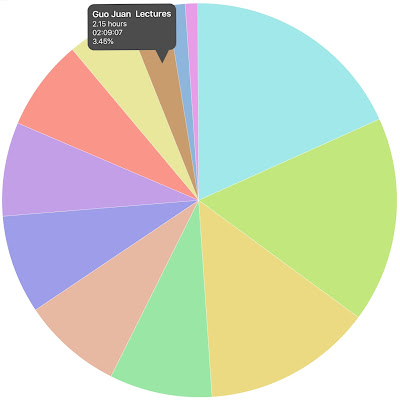 Guo Juan Lectures account for 2.15 hours, or 3.45% of my time. I decided that it made sense to separate the time I spend in The Internet Go School on go problems and lectures. Currently since I have a backlog of problems I am not watching new lectures unless they are beginner lectures which I really enjoy. Guo Juan does such a great job providing materials for lower level players. 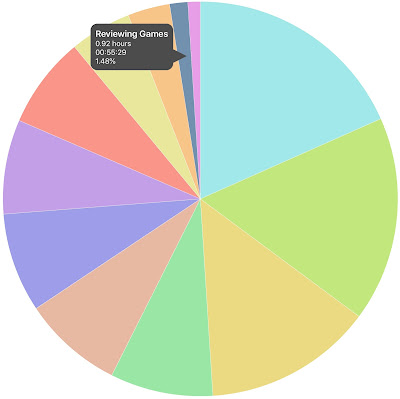 Reviewing Games accounts for 0.92 hours, or 1.48% of my time. This is a big weakness. These are the games I play outside of the Yunguseng Dojang. They mostly don’t get reviewed, and that is going to change. I am a supporter of OGS, so I have access to AI reviews of all of my games there, as well as anything I see fit to upload, but I do not take full advantage of that. I recently subscribed to a basic membership at AI Sensei which I like a lot more. I intend to discipline myself to review my games using AI Sensei. 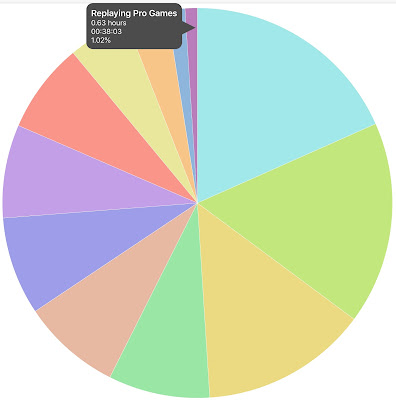 Replaying Pro Games accounts for 0.63%, or 1.02% of my time. I reviewed one Shusaku game using SmartGo Kifu last month. I am not sure that there is much value in reviewing pro games for me, but I will keep it as a category.
Initially I thought I would include a category for blogging, but I rejected that idea after I realized that it would dwarf the other categories, and not provide much real value for go study.
Posted by Terri at 2:43 PM

Cricket Bat Repair
Western Sports Centre we have a specialist Cricket Bat repair and restoration service centre helping you salvage your favourite cricket bats. No job is big or small so why don't you contact our specialists and get that repair done as soon as possible as once crack appears, it will continue to get worse, and eventually the bat will have to be replaced.