My Attendance At the U. S. Go Congress In Recent Years 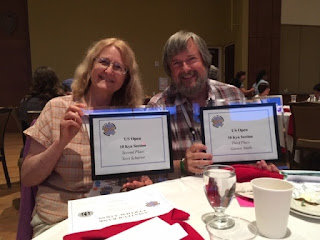 A few things have happened in my go life since I had been blogging with any frequency five years ago. I'm going to spread out reporting on those things over the course of a few posts. I will start with reporting on my participation at the U.S. Go Congress.

After discontinuing lessons with Yilun Yang I stopped playing go altogether except for tournament games at the Congress. I was really only playing with Yang anyway, but all of a sudden I was not playing at all except across the board at the Go Congress. All of my other tournament opportunities had dried up. The New Jersey Open was defunct, and there was nothing else nearby.

I continued to attend the Go Congress in the past few years with relative frequency, but I did miss a few.

I was at the 2014 Go Congress in New York City. This was one of my favorite Congress venues.

I was not in attendance at the 2015 Go Congress in the Twin Cities, so I went for two years without playing a game.

I attended the 2016 Go Congress in Boston. I took Amtrak. It was a great Congress.

I was not in attendance at the 2017 Go Congress in San Diego, so I had another two years without playing go.

I attended the 2018 Go Congress in Williamsburg where I did poorly and dropped back to double digit kyu for the first time in quite a few years. I had been 8 kyu for a brief moment in time, but had maintained a solid 9 kyu rating even without playing for a number of years.

I attended the 2019 Go Congress in Madison. It was time to fight back to 9 kyu. I was not sure that I could do it because, true to form, I had not played a single game in the year since the previous congress. My 10 kyu rank, however, was just a squeak lower than 9 kyu, so I did have a competitive edge. I managed to use that advantage and take 2nd place in the 10 kyu rank with a record of 4-2. Pictured with me here, at the top of the post, is one of my opponents, Gary, who I played in the 6th round. He beat me to take 3rd place in the 10 kyu rank. If I had won that game I would have still been in 2nd place and Gary would not have been in 3rd place, so I am glad he won. Gary was in a similar position as I, having recently squeaked down into the double digit kyu territory. We were the sandbaggers, and we came face to face in the 6th round.

My win in Madison convinced me that it was time to resume play and study. There will be more to come on that in my next post.
Posted by Terri at 1:44 PM