Getting Two Moves in a Row

Actually, you can, but your opponent has to make a mistake first. Both last year and this year during one of my US Open games I had an opponent play out of turn. It was my turn and my opponent placed a stone on the board. I'm not going to mention any names here, from last year or from this year, because that isn't important. Also, it could certainly happen to anyone. I will report, however, what I did in each case.

Last year when my opponent played out of turn I was shocked and started waving my hands and saying it was my turn, but it was too late, and the stone ended up on the board any way .  I had no clue whatsoever what to do about it. My opponent and I talked about it. I assumed that if I called over a TD that my opponent would lose the game right then and there, and that seemed like too severe a punishment to mete out. If we had been playing according to Japanese rules I think that is exactly what would have happened. As it was, I took pity on my opponent and decided to let it slide. The stone came off the board and the game continued. I was a little unsettled by the experience, and I lost that game by 1.5 points. I ended up resenting it after I found out what the consequences would actually have been of his having played two moves in a row. I thought about it a lot after I found out the consequences, and determined that I would not let this pass again.

My research into the situation revealed that the penalty was not nearly so severe as I thought. Under AGA rules the offense was not game ending in and of itself. Let's assume that black played out of turn. Black passes the wrongly played stone to the White player. White then gets two moves in a row, and Black passes a stone to white at the time when it would have been his turn to play between the two white moves. This new knowledge made me kick myself for hot having called over the TD. I could easily have gotten a two point advantage out of it to win the game.

I promptly forgot the consequences of play out of turn, and went on with my go life.

Then, one year later, during one of my games at the US Go Congress my opponent played out of turn again. There was once more waving of hands on my part as I informed my opponent that it was my turn. The stone came swiftly off the board. I hesitated for a moment, but I kept my cool and said that I would call over a TD after relaying the fact that I did not bother to do so last year for a similar event. I did tell my opponent that the consequence of having played out of turn was not so severe as one might suspect. I wasn't out to play a head game on this person.

It took quite awhile to get a TD. The TD and I approached the board together. Resolving the issue actually became a bit tense as there seemed to be a misunderstanding over whether my opponent had actually played the move or merely had begun to play the move as was claimed. There was little difference in my opinion between playing it and beginning to play it if it was on the board, and if my having said it was my turn was the only thing that brought the stone up off the board. My opponent also never mentioned the intention to deny the move when I went to fetch the TD. After it became clear that I wasn't budging on the issue, my opponent finally accepted my account of the event and also accepted the resulting penalty. The TD did hang around for the resumption of play. He also returned during the scoring phase, which I thought was rather nice because it showed that he wanted to be sure that we were both conducting ourselves in a civil manner in the aftermath of what was potentially a very unpleasant situation.

It was a close game, and I gained a bit from from the exchange of pass stones, yet my opponent still won the game by 3.5 points. At the time I was actually relieved and pleased with the result because I didn't like the idea of winning because  my opponent lost track of whose turn it was.

My drive to win must have been incredibly low. I totally failed to benefit from having the opportunity to take two moves in a row. This was a head smacking oversight on my part. If I had really wanted to win I might have looked harder for a group with two eyes composed of only one point each. That would have been decisive. Or I might have found a peep that could not be ignored. I could have gone on to punish that peep because my opponent would not have been able to answer it because of the penalty of losing a move. In review later I found such a peep, and a part of me is sorry I did not look for it during the game. I was so focused on getting on with the game, and gaining distance from the unpleasantness, that I played two relatively harmless sente moves in a row and collected the two pass stones offered. 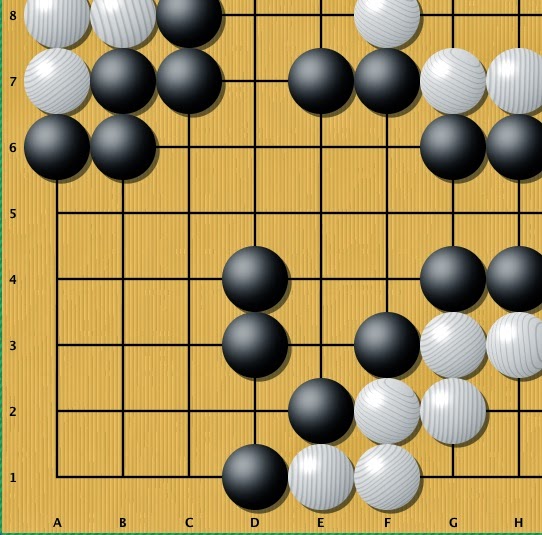 There is a very nice peep at c2 that would have easily won the game for me.

Above all else I value my connection to the go community, and so I am proud of the fact that after we had both passed I was able to tell my opponent that I was sorry that things had become a bit unpleasant and that I would like to discuss the go application Smart Go Kifu that I had been using to record the game and also the app Smart Go Books, because my opponent had inquired about thee applications, and I am always eager to promote Ander's apps.

My opponent and I had a nearly hour long discussion during which we discovered that we had previously exchanged emails. It's a small go world after all. We spent time reviewing our game, which we were able to do because I had recorded it with Smart Go Kifu.

At this point I am somewhat conflicted over what I might do in the future if my opponent makes two moves in a row. I know for sure that I won't flap my hands and sputter about how it is my turn. That only results in the opponent removing the stone so quickly that they may decide to argue that it was never actually played. I will allow that stone to quietly be played. But will I also allow it to be quietly removed? I don't know yet.

Fascinating! I never knew that such a rule existed. To be honest, I've never encountered anyone who tried to play a move before I did. It says a lot about the player when you are so enraptured in figuring out your next move you don't even realize where the opponent played. In fact, I imagine this is a rare occurrence as we climb in strength since you come to appreciate how a single move can change the entire board, so always finding out what your opponent did last is important in planning the next move.

Nonetheless, I have to say that I would probably allow the opponent to simply take back the move if it's a first offense. If it were to occur again however, I would then call the TD over.

I'm glad to hear that things were not terribly awkward afterwards and that you were still able to have a lively discussion for an hour after the match. It certainly is a great community!

I have to admit that it occurred to me also that it was odd to make a move without knowing the last move made. I agree that this should be a rare occurrence moving forward. I was happy that I was recording the game, however, because it was easy to show that it was my turn. I stopped recording when we resumed play because I didn't want to figure out how to enter the pass stones, and i was a bit flustered.

Last year, Guo Juan and I were playing pairgo in Poland. We had won our first two rounds and it was late at night. We were playing a couple 5 dan players, and amazingly we were ahead. Of course, it's always my job to lose the game, being the weakest player at the table. But Guo Juan is very good at picking lines of play that I have some chance of following and we have a good pairgo record. Anyway, in this match, a ko fight started. It was late at night and I was deep in the fog of war. Guo Juan made a move and we all studied the board for a long time. Then I made a move. Two moves in a row. Our opponent pointed it out and said we forfeited. We didn't argue, as I thought that was actually the rule. So that was the end of the game and the tournament for us.

You must have been using Japanese rules for the pair go in Poland, and that makes sense. We use Japanese rules for pair go at the US Go Congress even though all other games use AGA rules. So two moves in a row in pair go would have ended the game. I believe it was even mentioned in the announcements.