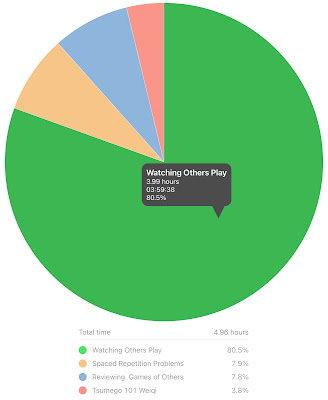 I decided to relax for a day. I meant to take a day off from go. This is what that looks like.

I did not play any games, nor did I watch any lectures, but I watched a lot of go games. The nearly four hours of Watching Others Play was spent watching just one player on OGS who happens to be a good friend of mine in AYD. We message each other with game links on Discord when we start a game on OGS. He had a particularly active day yesterday, and I think I watched most of his games. I was watching them well into the next morning.

In addition to watching my friend play I did my obligatory Guo Juan Go Problems. I did Tsumego too, though not nearly enough. I did do a bit of Reviewing Games of Others with my go friend after some of his games.

Taking a day away from go resulted in five hours of Go Activity, much of it non essential.